[This article was written for a discussion on “The Korean Peninsula: Towards an Ecumenical Accompaniment for Building Justice and Peace” at the 10th General Assembly of the World Council of Churches, which took place in Busan, Republic of Korea, from 30 October to 8 November 2013.] 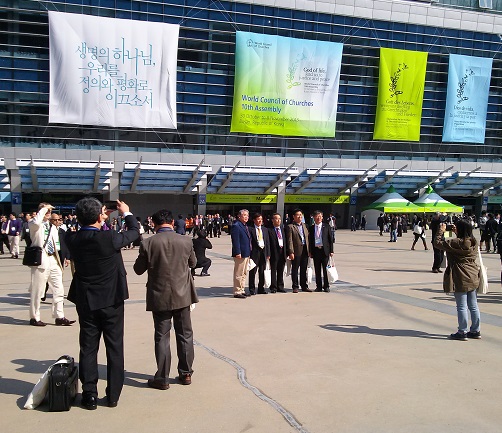 Site of the 10th WCC Assembly in Busan, ROK (Photo by EW)

The Korean War claimed millions of lives between 1950 and 1953. Sixty years ago, that war paused with the signing of an armistice, marking the cessation of the hot war on the Korean Peninsula. But an armistice is not a peace, and the hostilities of the Cold War have not ceased to this very day. The world’s largest armies, with the most powerful weapons, still threaten each other across the so-called “demilitarized” zone that dissects this beautiful country. This seemingly endless confrontation continues to be used by those in power to prove that the price of security is readiness to resort to arms, and that justice is irrelevant to peace.

In the name of this false security, economic well-being continues to be sacrificed in favour of military prowess. But though the pain of this tragedy is borne primarily by Koreans, the illness that caused it is global. When the WCC thirty years ago embarked on a mission to forge lines of communication between North and South Korea, we could not help but challenge the sanity of the bi-polar world that was taken for granted as a necessity for the preservation of security in our World. We no longer have a bi-polar world, but we still have a bi-polar mentality. Bi-polar illness is what used to be called schizophrenia. The continued division of Korea is a clear symptom of our global schizophrenia. END_OF_DOCUMENT_TOKEN_TO_BE_REPLACED 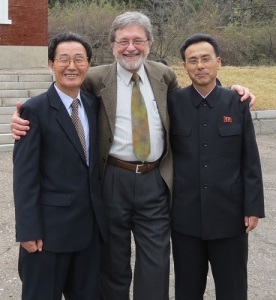 For more than a year, this vacancy has been unfilled. This morning I received a fax from Pyongyang announcing the appointment of Rev. Kang Myong Chol as the new Chairman of the KCF. Kang Myong Chol had previously served as Chair of the Pyongyang City KCF.

At the same time, Rev. Ri Jong Ro was appointed KCF Vice-Chairman. Ri started in KCF as an interpreter, accompanying Kang Yong Sop at numerous international meetings, as well as visits by KCF delegations to churches around the world. He later studied theology and was ordained. He subsequently served as Director of the KCF International Affairs Department, maintaining relationships with the World Council of Churches and various denominations such as the United Church of Canada.

Text of his fax reads as follows:  END_OF_DOCUMENT_TOKEN_TO_BE_REPLACED

Canada’s response to North Korea has been, at least rhetorically, aggressive. Since 2010 our government has pursued what has been termed a “Controlled Engagement” policy. The Controlled Engagement (“CE”) policy restricted bilateral contact with the regime except to four distinct areas: regional security concerns, human rights and the humanitarian situation, inter-Korean relations, and consular issues. It also forbid Canadians from importing and exporting anything into North Korea, and also introduced strict technology and investment sanctions. END_OF_DOCUMENT_TOKEN_TO_BE_REPLACED

A delegation of experts led by Andre Leu, President of the Bonn, Germany-based International Federation of Organic Agriculture Movements (also the current Chair of the Organic Federation of Australia and former Chair of the Far North Queensland Lychee Growers Association), was in town to direct the two-day program, which included, among other seminars, “Multi-Functional Benefits of Organic Agriculture, Soil Health and Nutrition,” “Green Manure,” and “Humus Soil and its Making.” END_OF_DOCUMENT_TOKEN_TO_BE_REPLACED

[This article, first published on our partner-website 38North on Tuesday, 28 May 2013, is based on presentations given at Glendon College, York University in Toronto in April, and at UCLA, Los Angeles in May. It represents CanKor’s attempt to provide a framework for rational discussion among conflicting policy alternatives aimed at relieving the suffering of North Korean people. CanKor Editor Erich Weingartner has been involved with Korea since 1978, spending half his career working on human rights and the other half dealing with humanitarian assistance. –CanKor]

With political leaders and the media perpetually focused on the behavior of a young hereditary leader and his nuclear-armed military, does anybody really care what happens to ordinary people in North Korea? There are two major constituencies internationally that do care: the humanitarian community and the human rights community.

When widespread starvation in the Democratic People’s Republic of Korea (DPRK) became evident in the mid to late 1990s, humanitarian agencies launched a massive and largely successful rescue effort to stem the famine. Human rights organizations have meanwhile played a pivotal role in exposing North Korea’s dismal record of abuses, culminating in the recent appointment by the United Nations Human Rights Council of a Commission of Inquiry (CoI).

Since both claim that their objective is to ease the plight of suffering North Koreans, you might think these communities would be natural allies. But sadly, those working on North Korean human rights do not seem to get along very well with those providing humanitarian assistance to the DPRK. Not only do their goals and methods often contradict each other, their practitioners sometimes engage in verbal battles and mutual recrimination. This conflict is likely to intensify now that the three-member CoI has begun its one-year assignment. END_OF_DOCUMENT_TOKEN_TO_BE_REPLACED

“Struggle for Survival” is an event supported by the Scadding Court Community Centre in Toronto, Canada, and the office of Toronto City Councillor Raymond Cho. Jihyun Kwon, one of the organizers, asked CanKor to help promote the event, whose purpose is to raise funds to assist North Korean refugees in Toronto. See details in the poster below.

The event is sponsored by “North Koreans in Canada,” a small non-profit, non-partisan organization devoted to serving North Korean refugees (both status and non-status) living in Canada. According to this organization, there are currently about 2,000 North Koreans who have found refuge in Toronto, but still struggling to survive. END_OF_DOCUMENT_TOKEN_TO_BE_REPLACED

A Call for Peace and Reconciliation on the Korean Peninsula

[The Korean United Methodist Church of Atlanta was the site of an ecumenical Korea peace conference from 15 to 17 May 2013. Theme of the event was “Embrace Peace, Pursue It: From Armistice to Just Peace on the Korean Peninsula.” Keynote and plenary speakers included The Most Rev. Katharine Jefferts-Schori, presiding bishop and primate of the Episcopal Church USA, The Rev. Dr. Syngman Rhee, former president, National Council of Churches USA and a former moderator of the General Assembly of the Presbyterian Church USA, The Rev. Dr. Jaejung Lee, professor at the Sungkonghoe University, Seoul, former South Korean Minister of Unification, and Dr. Christine Ahn, Executive Director of the Korea Policy Institute. Sponsoring organizations were the United Methodist Korean American National Association; Committee on Korean Reunification & Reconciliation; General Board of Global Ministries; United Methodist Women; United Methodist Korean Ministry Plan; and the National Council of Churches, South Korea. Workshop theme were: Building a Case for Peace Treaty: Steps for Advocacy; Women & Militarism; Humanitarian Mission & Building Solidarity in North Korea; The suffering of North Korean defectors and their survival in the South Korean society and church; and Nuclear Armament & Peace in the Korean Peninsula. Following here is the statement issued by conference participants. –CanKor] END_OF_DOCUMENT_TOKEN_TO_BE_REPLACED

A North Korean mother lies with her acutely malnourished son, plagued by sores, at a county hospital in September 2011. (Photo by Jim White, Mercy Corps)

That was two years ago. Portland-based Mercy Corps and four other humanitarian organizations given rare access to North Korea warned: “a catastrophic situation is developing.” After a year of prodding, the U.S. Agency for International Development announced 120,000 metric tons of food for North Korea.

Communication and good will broke down, leaving White House officials little to draw on today as Pyongyang ratchets up threats of nuclear attack. END_OF_DOCUMENT_TOKEN_TO_BE_REPLACED 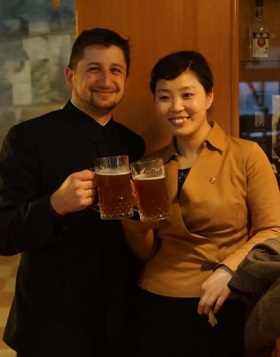 Josh Thomas and Ms Yu, one of the North Korean guides, enjoy draft beers at the bar of the Yanggakdo Hotel Microbrewery. (Photo by Joseph A Ferris III)

It’s been a bad month for business in the DPRK, but the ROK might be the biggest sufferer from all the saber-rattling on and around the peninsula. END_OF_DOCUMENT_TOKEN_TO_BE_REPLACED