A Call for Peace and Reconciliation on the Korean Peninsula

[The Korean United Methodist Church of Atlanta was the site of an ecumenical Korea peace conference from 15 to 17 May 2013. Theme of the event was “Embrace Peace, Pursue It: From Armistice to Just Peace on the Korean Peninsula.” Keynote and plenary speakers included The Most Rev. Katharine Jefferts-Schori, presiding bishop and primate of the Episcopal Church USA, The Rev. Dr. Syngman Rhee, former president, National Council of Churches USA and a former moderator of the General Assembly of the Presbyterian Church USA, The Rev. Dr. Jaejung Lee, professor at the Sungkonghoe University, Seoul, former South Korean Minister of Unification, and Dr. Christine Ahn, Executive Director of the Korea Policy Institute. Sponsoring organizations were the United Methodist Korean American National Association; Committee on Korean Reunification & Reconciliation; General Board of Global Ministries; United Methodist Women; United Methodist Korean Ministry Plan; and the National Council of Churches, South Korea. Workshop theme were: Building a Case for Peace Treaty: Steps for Advocacy; Women & Militarism; Humanitarian Mission & Building Solidarity in North Korea; The suffering of North Korean defectors and their survival in the South Korean society and church; and Nuclear Armament & Peace in the Korean Peninsula. Following here is the statement issued by conference participants. –CanKor] END_OF_DOCUMENT_TOKEN_TO_BE_REPLACED

The Rev. Kang Yong Sop, chair of the Central Committee of the Korean Christian Federation (KCF), passed away in Pyongyang on 21 January 2012, at the age of 80. I have known  Kang for more than 20 years. On the same day his death was announced, I received a New Year’s greeting card bearing his signature. 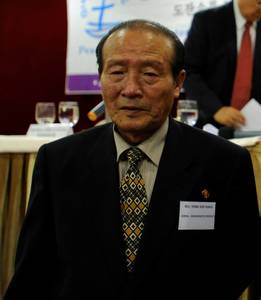 Rev. Kang was the son of another Protestant pastor, with family links to Kim Il Sung. Prior to his ordination, Kang served as North Korean ambassador to Romania. He was a member of the Supreme People’s Assembly and on occasion chaired sessions of the SPA. As KCF Chairperson, Kang led numerous delegations to foreign countries, including Canada on at least two occasions. He forged links with overseas churches and the ecumenical movement, attending three Assemblies of the World Council of Churches, as well as participating in numerous church-related events where both North and South Koreans were in attendance.

Under his leadership the KCF became active in humanitarian projects, building noodle and bread factories and distributing food, clothing and other items donated by churches abroad. Two Protestant church buildings exist in Pyongyang, as well as the KCF headquarters and a theological school for training deacons and pastors. Bongsu Church, the larger of the two, has recently been rebuilt, financed by South Korean churches. END_OF_DOCUMENT_TOKEN_TO_BE_REPLACED

[CanKor Brain Trust member Lutz Drescher, East-Asia Liaison Officer of the German Association of Churches and Mission, sent us these two “remarks” by South Korean church leaders on the death of Kim Jong Il. He explains that they are “remarks” rather than “statements”, first because a death is not an appropriate occasion for churches to make formal statements, and secondly because the church leaders are aware that their opinions may not be shared by a majority of churchgoers, let alone the majority of member churches of the National Council of Churches in Korea. “Because of the traumatic experience of the Korean War that last to this day and a Cold War that has not ended,” Drescher states, “all discussions about the future of the Korean Peninsula continue to labour under the shadow of conflicting ideologies. The South Korean people, as well as the South Korean churches therefore remain deeply divided.” We reproduce the two “remarks” here. The German letter by Rev. Drescher may be read here. –CanKor]

The National Council of Churches in Korea expresses its sincere condolences on the death of Kim Jung Il, North Korean Leader, and we pray that God’s consolation be with people in North Korea who are in the midst of grieving and suffering. It should not be a moment which is threatening peace on the Korean peninsula and worsening of North and South relationship. We hope that South Korean government take this to ease conflict between North and South, sending condolence delegation consisting of representatives from government as well as from society including religious community and paying its respects to the deceased. And We ask international community to cooperate continuously not taking this for breaking of security on the Korean peninsula, but for building peace on the region of North East Asia. END_OF_DOCUMENT_TOKEN_TO_BE_REPLACED

Second food shipment from NCCK travels by truck across the DMZ

[The National Council of Churches in (South) Korea recently sent a shipment of flour to the (North ) Korean Christian Federation via the heavily-guarded Demilitarize Zone at the site of the Kaesong Industrial Park. Because of South Korean government restrictions, the first shipment in May was sent through the Amity Foundation in China. The Rev. Mrs. Heawon Chae, Executive Coordinator of the Ecumenical Forum for Peace, Reunification and Development Cooperation on the Korean peninsula sent us this report. –CanKor.] 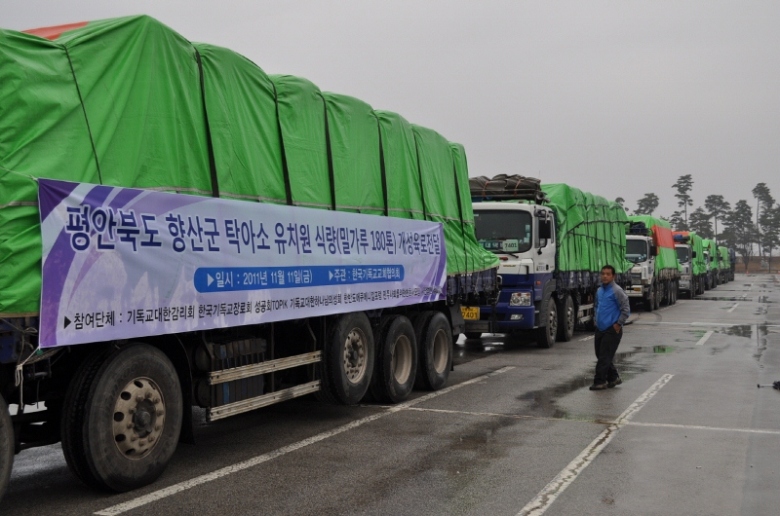 According to the report by 5 US based aid organizations which visited North Korea on September following last March visit, it is said that large numbers of people are suffering from chronic malnutrition and are facing with starvation due to reducing rations.

In this situation, the NCCK sent the second food shipment amounted 180 tons of wheat flour to the Korean Chrisitan Federation. The shipment was transferred to the KCF by truck at the Bongdong station, Gaesung city, just across the border between the North and the South. END_OF_DOCUMENT_TOKEN_TO_BE_REPLACED

[Since the late 1980s when North and South Korean Christians first met, the (North) Korean Christian Federation (KCF) and the (South) Korean National Council of Churches (NCCK) have agreed to an annual joint day of prayer on or near the 15 August liberation day that is celebrated by both parts of Korea. Here is how NCCK General Secretary the Rev. Kim Young Ju explains it: “On August 15, our nation of Korea will celebrate its Independence Day. That day commemorates our liberation from outside occupation, and the renewal of an independent country from ‘Baekdu Mountain (on the northern border with China) to Halla Mountain (on Jeju Island in the south)’. In the years after that Liberation, tragic events led to the present partition of Korea, and the division of our one people. We pray for the day when peaceful restoration will come and our nation will again be one. The NCCK invites all partners to share in our common prayer on Sunday, August 14.” The text of the common prayer follows here. –CanKor.] END_OF_DOCUMENT_TOKEN_TO_BE_REPLACED

[The World Council of Churches is an ecumenical fellowship of churches founded in 1948. Today the WCC brings together 349 Protestant, Orthodox, Anglican and other churches representing more than 560 million Christians in over 110 countries, and works cooperatively with the Roman Catholic Church. This post is taken from a WCC press release dated 27 June 2011. –CanKor.]

The silence of the international community to the plight of millions of North Koreans facing starvation and severe malnutrition was of deep concern to the members of an ecumenical forum for peace and reunification of the Korean Peninsula, which met last week, 16 to 19 June, in Nanjing, China.

The group, the steering committee of the Ecumenical Forum for Peace, Reconciliation, Reunification and Development in the Korean Peninsula (EFK), called on churches and the ecumenical community to advocate and lobby governments, the United Nations and the European Union to end the current strategy of using food as a political weapon to isolate the North Korean government and cause its downfall. END_OF_DOCUMENT_TOKEN_TO_BE_REPLACED

A letter of “deep appreciation” (dated 6 June 2011) was received by the National Council of Churches in Korea (NCCK) from the Rev. Kang Young Sup, Chairman of the KCF.

“In his message to me,” writes Rev. Kim Young Ju, NCCK General Secretary, “he expressed the KCF’s support on various efforts of the NCCK for justice, democratization, peace and reunification especially during a time of difficult circumstances in our country. Rev. Kang Young Sup said that the KCF has started the distribution of the flour to the kindergartens based on an overall distribution plan for 3 townships. He gave details for each kindergarten and indicated that about 31,400 children would benefit from this shipment. The KCF asked NCCK to send additional humanitarian aid for 8 townships in North Korea. They mentioned concrete quantity (480 metric tons of flour) needed for 106,800 children of some kindergartens.”

CanKor previously reported that the NCCK was under fire from the Lee Myung-Bak administration for sending unauthorized food aid to North Korea. (See “Related Articles” below.)

South Korean Churches under fire for sending aid to North

The National Council of Churches in Korea (NCCK) is coming under fire for sending aid to the DPRK. The shipment of 172 tons of food aid was not approved by South Korea’s government. Unification Ministry spokeswoman Lee Jong-joo says it was not right for the church organization to contact the North Koreans and go ahead with the aid shipment, without getting South Korean government approval. Lee says the ministry will take necessary measures after hearing from the National Council of Churches about its activities. She adds that the government is monitoring the situation.

The NCCK acknowledges having unauthorized contact in Beijing with North Koreans to arrange the donation (Read Press Release here).

South Korea and the USA are still undecided on how to respond to recent requests by the DPRK for food aid. In the Republic of Korea, the Lee Myung-Bak regime is threatening legal action against the National Council of Churches in Korea (NCCK) because they have sent food aid via China’s Amity Foundation to the Korean Christian Federation in Pyongyang. A letter received by CanKor from NCCK General Secretary Rev. Dr. Kim Young-ju alerts churches worldwide that, “The Korean government is now very angry at this NCCK’s activity, and it is going to make this case to the court as an illegal activity against to the Law of civilian cooperation and exchange between the North and the South, which strictly forbids any contact and meeting with North Korea without the permission of government.” (NCCK_Food Assistance _May 23rd 2011[1].) END_OF_DOCUMENT_TOKEN_TO_BE_REPLACED

The National Council of Churches in Korea (NCCK) organized a workshop for the International Ecumenical Peace Convocation (IEPC) held in Kingston, Jamaica. The workshop was held Thursday, 19 May. Press release below:

Realizing a peaceful reunification of Korea would not only be a gift for the Korean people but also for the people of Asia and the world as a whole. For the church, both in and outside Korea, realizing a unified Korea will also mean the church being unified in their efforts.

With this background the National Council of Churches in Korea (NCCK) organized a workshop for the International Ecumenical Peace Convocation (IEPC) being held in Kingston, Jamaica 17-25 May. The workshop was held Thursday, 19 May.

“The NCCK has been cooperating closely with the Christian Conference of Asia (CCA) and the World Council of Churches (WCC) to contribute to the peaceful reunification in the Korean peninsula since the 1984 Tozanso consultation in particular,” said the moderator of the workshop, Dr Samuel Lee, vice-chairperson of the NCCK Committee of Reconciliation and Reunification. END_OF_DOCUMENT_TOKEN_TO_BE_REPLACED