Exactly 13 years after the first CanKor newsletter was sent out to a handful of subscribers on 25 July 2000, we have reached the end of the road with this CanKor Report number 350. Cordial expressions of thanks and regret about the closing of CanKor continue to reach us. Many of them are directed towards me personally. I wish to quote two of them here, because each author has been an important mentor of mine.

The first is from David B. Dewitt, currently Vice-President of Programs at the Centre for International Governance Innovation in Waterloo. David was my faculty advisor when I did my fellowship year at York University in Toronto:

“I, too, am saddened by the pending termination of CanKor. You provide an important contribution and service to those interested in not just the Korean Peninsula but also in the larger Asia Pacific context. And you and your team have done this with focus, determination and integrity for so many years. Just at a time when some mix of both rhetoric by some and indifference by others seems to be emerging, your lens would have been all that much more important. Although CanKor may be winding down, I trust that it doesn’t mean that we won’t regularly or at least occasionally be hearing from you.”

The second comes from Baldwin Sjollema, who was a role model for me when he headed the highly controversial World Council of Churches’ Programme to Combat Racism in the 1970s:

“What you and your wife have done over these past years through CanKor is exactly what I think the ecumenical movement is about: serving with conviction and compassion the wider human community in its almost endless struggle for justice and peace. The Korean issue is one of the toughest in today’s world. You have set in motion something, and something will have to take its place! With your service you have made a real contribution, which is appreciated by many people like myself, especially because nobody else did it. I am most grateful to you and express my special gratitude to you.”

As much as I take pride in such heartfelt approbation, I cannot in good conscience take all the credit for what CanKor is and was. Some of those who were involved in the past are mentioned in “CanKor history” on our website. We had powerful moral and material support from many friends, colleagues, contributors, volunteers and donors. Let me just mention a few of them here: END_OF_DOCUMENT_TOKEN_TO_BE_REPLACED

The Countdown is On

Following the announcement that CanKor is coming to an end, we received numerous heartfelt expressions of regret and congratulations. Let me share some of them with you:

“You have been selfless, brilliant, imaginative, balanced and inspirationally dogged in conceiving, launching and sustaining an important enterprise to push the North Korean rock up a steep Canadian hill.” –Paul Evans

“What you have accomplished is remarkable!  You have been pulling this sled loaded with heavy logs uphill, winter and summer, virtually alone.  Your accomplishments have been (sometimes grudgingly) recognized in officialdom, academic and church circles in Canada, by specialists abroad and that handful (which may be more than a small one) of North Koreans who enjoy your humor, profit from your insights, trust your integrity, and now and again find it convenient to communicate to a wider public through you.” –Dwain Epps END_OF_DOCUMENT_TOKEN_TO_BE_REPLACED

The End (of CanKor) is at Hand

All good things must come to an end. But it seems that bad things tend to stick around a lot longer. Sixty years after the signing of the Korean Armistice Agreement, the Korean War still claims victims to this very day. Divided families, escalating militarism, regional insecurities and violence in word and deed have become a generational legacy, perpetuating human suffering and casting a dark shadow on the future of Korea, the region and the wider world community.

Despite its modest capacities, Canada has played a significant role in Korea for more than a century. Canadian missionaries built schools and hospitals and participated in struggles against Japanese occupation and annexation in the first half of the 20th century. Canadian soldiers participated in the Korean War. Canadian activists supported the democratization movement in South Korea. Canadian humanitarians continue to provide assistance for food security and capacity-building in North Korea. In recent years Canadian teachers have taught the English language in both North and South Korea. Canadian human rights activists have provided assistance to displaced North Korean migrants and refugees. Canadians have been active in exchange programmes for professionals and students on both sides of the Korean divide.

Canada’s response to North Korea has been, at least rhetorically, aggressive. Since 2010 our government has pursued what has been termed a “Controlled Engagement” policy. The Controlled Engagement (“CE”) policy restricted bilateral contact with the regime except to four distinct areas: regional security concerns, human rights and the humanitarian situation, inter-Korean relations, and consular issues. It also forbid Canadians from importing and exporting anything into North Korea, and also introduced strict technology and investment sanctions. END_OF_DOCUMENT_TOKEN_TO_BE_REPLACED

“Struggle for Survival” is an event supported by the Scadding Court Community Centre in Toronto, Canada, and the office of Toronto City Councillor Raymond Cho. Jihyun Kwon, one of the organizers, asked CanKor to help promote the event, whose purpose is to raise funds to assist North Korean refugees in Toronto. See details in the poster below.

The event is sponsored by “North Koreans in Canada,” a small non-profit, non-partisan organization devoted to serving North Korean refugees (both status and non-status) living in Canada. According to this organization, there are currently about 2,000 North Koreans who have found refuge in Toronto, but still struggling to survive. END_OF_DOCUMENT_TOKEN_TO_BE_REPLACED

Remembering the RAC, by Justin Rohrlich

[CanKor Editor Erich Weingartner talks to New York City based journalist Justin Rohrlich about the early days of the RAC, an expatriate bar and social club that attained a surprisingly worldwide reputation as a must-visit venue for foreign visitors in Pyongyang. This article was published on 23 April 2013 in NKNews.org. –CanKor] 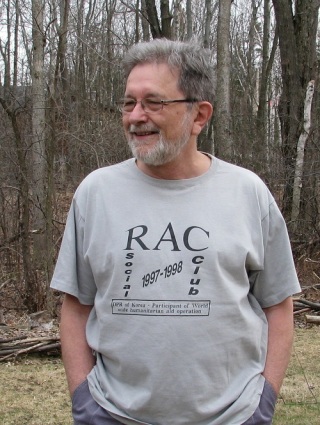 “This was the T-shirt we produced back then,” Weingartner says. “As you can see, no reference to ‘Random Access Club,’ haha. On the back of the shirt were the names of the agencies, both UN and NGO, that were resident in North Korea at that time. 20 in all.”

Mirroring the experience of other expats that have lived in North Korea, Erich Weingartner says that when he arrived in Pyongyang in 1997 to head the Food Liaison Unit, a division of the UN World Food Programme, “there was literally nothing for foreigners to do” outside the Munsudong compound within which virtually all of them reside while in-country.

“In those days, they had a bowling alley, which still exists, and we used — we had our daughter’s birthday party there,” Weingartner tells me. “They had a couple of amusement parks in the city; there were some classical concerts you could go to; they had a zoo. I never went, it was apparently pretty sad to see the animals there, but it was available. Other than that, we mostly played volleyball and soccer and so on in the diplomatic compound.”

“The Russians had more access, for example, to a golf course, occasionally some hunting,” he remembers. “They’ve been there so long and have such a huge embassy, they have extra privileges in certain areas.”

But even though Weingartner, now Editor-in-Chief of CanKor, an Ontario-based initiative “seeking rational North Korea policy,” managed to obtain a North Korean driver’s license (the saga involved an interpreter who “sweetened” Weingartner’s incorrect answers to ensure he passed the oral portion of the exam and a road test that tested his ability to drive up a winding hill and halfway into a circular driveway, then back down to the bottom of the hill in reverse), his movements were still restricted. END_OF_DOCUMENT_TOKEN_TO_BE_REPLACED