[Under the above title, the DPRK’s most authoritative newspaper Rodong Sinmun published a rare editorial on the eve of the new Chinese leader Xi Jinping’s first summit meeting with US President Barack Obama in California. Rodong Sinmun is the official organ of the Central Committee of the Workers’ Party of Korea. Ostensibly, the occasion for the editorial is the 30th anniversary of former North Korean leader Kim Jong Il’s first visit to China. It is a legacy to which young leader Kim Jong Un is said to be paying “great attention”. The China-DPRK friendship will go “a long way towards stabilizing the situation in the Korean Peninsula,” says the editorial, without wasting a single word on the nuclear question, a topic that will likely figure prominently in the Obama-Xi talks. –CanKor] 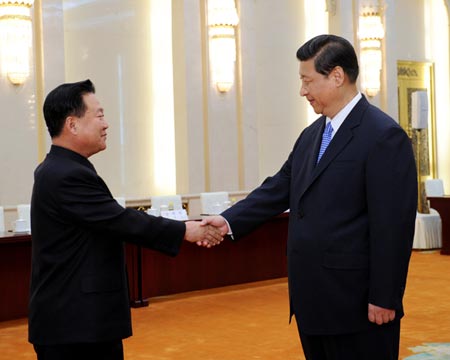 This is the 30th year since Leader Kim Jong Il’s first visit to China from June 1 to 13, 1983. His train trip covered a total of 6 250 km, making more solid the DPRK-China friendship provided and kept in bloom by the leaders of old generations of the two countries.

It is a beautiful tradition for the leaders of the two countries to frequently visit each other like brothers without being restricted by any diplomatic conventions and rules and share and deepen the friendly feelings.

The 30 years that followed his first visit to China furnished an ample proof that the DPRK-China friendship would be unbreakable.

Over the past 30 years the situation of Korea and the North East Asia was very complex, but the two countries supported and closely cooperated with each other in their struggle for socialist construction and national unity. END_OF_DOCUMENT_TOKEN_TO_BE_REPLACED

What a Tangled Web We Weave, by Kim Dong Jin

[Kim Dong Jin is Director of the Peace Culture Institute in Korea (PCIK), a newly-founded research institution based in Seoul, Korea. The PCIK is dedicated to sharing information, knowledge and experience on peace-building in conflict-affected societies. Pursuing a collective peace intelligence and peaceful open source collaboration, the PCIK provides space for researchers, practitioners and experts from various disciplines to discuss issues related to conflict transformation by peaceful means on the Korean peninsula, in Asia, and beyond. This article was first published on the PCIK blog site on Thursday, 30 May 2013. –CanKor]

On 22 May, the North Korean Committee for the Realization of the 6.15 Joint Statement proposed holding a joint ceremony at either Kaesong or Mt. Keumgang, to commemorate the 13th anniversary of the Statement issued at the conclusion to the 15 June 2000 Summit meeting between South Korean President Kim Dae Jung and North Korean leader Kim Jong Il. The South Korean counterpart Committee responded positively, interpreting the proposal in relation to the issues at the closed Kaesong Industrial Complex.

“The suggestion to use Kaesong by North Korea as a venue for the event indirectly expresses their desire to restore the Kaesong Industrial Complex”, the South Committee said. END_OF_DOCUMENT_TOKEN_TO_BE_REPLACED