The young Kim Jong Un appeared before television cameras to read the lengthy speech, which will be the subject of intensive study within North Korea. But as can be seen by a sampling of “expert” opinions, this annual summary of DPRK policies is also carefully dissected by DPRK-watchers the world over.

The full text of the speech (courtesy the Korean Central News Agency KCNA) can be read at the following link: New Year Address Made by Kim Jong Un.

To see the young leader reading the text (with the voice of an interpreter in English) please watch the video at the bottom of this article.

Here follow some early commentaries about the significance of this speech by a number of (mostly American) experts as assembled by Chris Nelson taken from the 2 January 2013 Nelson Report:  END_OF_DOCUMENT_TOKEN_TO_BE_REPLACED

Books: Inspector O and the case of Jon Yong Chol

A most unusual document reached us at CanKor early in August. It isn’t unusual for us to receive messages from the Pyongyang-based Korean Committee for Solidarity with the World People. We are obviously on the KCSWP mailing list, and have published a number of their documents right here on the CanKor website. Usually these concern anniversaries or special pronouncements by the DPRK Ministry of Foreign Affairs.Not this time. Attached to the partially garbled email message was a file with an attention-grabbing title: “INTERVIEW WITH THE ARRESTED TERRORIST.” The email explains that Jon Yong Chol had been caught trying to perpetrate the “hideous crime of undermining the supreme dignity of the DPRK at the instructions of the U.S. and south Korean intelligence agencies.” He was subsequently interviewed by domestic and international reporters in Pyongyang on 19 July 2012.

I found it interesting that the DPRK scribes referred to this document throughout as an “interview” although – as you can see from the transcript – the hapless Jon Yong Chol clearly calls it a “confession”. Have DPRK translators become aware that the word “confession” elicits an emotionally negative response and wanted to give this document an air of objectivity? The email underlines repeatedly that the important thing to pay attention to is the identity of the ROK and US puppet masters, not the gullible individual who was close to committing the crime.

Jon’s confession is excruciatingly detailed, naming names, organizations and places. The goal behind a conspiracy to blow up monuments to Kim Il Sung (the “statue demolition society”, purportedly) in order to sow confusion and undermine confidence in the central government’s authority also makes political sense. In other words, if this confession is a fiction, it has been very well researched and made to seem perfectly plausible, at least to the casual reader. END_OF_DOCUMENT_TOKEN_TO_BE_REPLACED 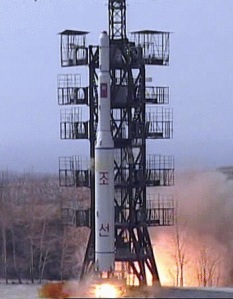 Test firing of an Unha-2 missile (photo by KCNA)

[Chris Nelson of the Nelson Report gathered a number of reactions from North Korea experts on what seems to be an about-face by the DPRK on an agreement made 29 February 2012 for a moratorium on missile tests. What exactly happened here? There are a number of theories with disturbing implications. Has the young Kim Jong Un just made his first mistake in international relations? Is this the result of two factions in the ruling elite working at cross-purposes? Was the fledgling leader unclear that a satellite launch bears a striking resemblance to a ballistic missile test? What will this mean for US AID food assistance deal. If the food part of the Leap Day deal is scuttled as a result of the satellite launch announcement, can the US Administration continue to claim that humanitarian assistance is unrelated to strategic and military issues? These and other questions are mulled over by a group of Chris Nelson’s “loyal readers” in Friday’s Nelson Report (16 March 2012), reprinted here by permission. –CanKor]

In barely 24 hours, the situation with N. Korea has gone from skeptical but hopeful to downright furious…and deeply worried a crisis confrontation is coming soon.

The Obama Administration denounced the move as “highly provocative…in direct violation of UN Security Council Resolutions…poses a threat to regional security and would also be inconsistent with North Korea’s recent undertaking to refrain from long-range missile launches.”

The sense of crisis deepened as informed sources learned of the “back story” leading up to Pyongyang’s declaration last night it planned to celebrate the 100th anniversary of founder Kim Il Sung’s birth with a satellite launch on April 15…a missile launch in clear, explicit violation of existing UN resolutions supported by China and the other 6 Party Talks participants. END_OF_DOCUMENT_TOKEN_TO_BE_REPLACED