…plus a number of other items, including a selection of North Korean tours by various tour operators. END_OF_DOCUMENT_TOKEN_TO_BE_REPLACED 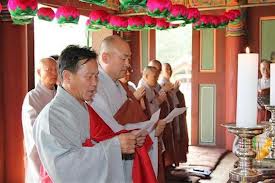 South and North Korean Buddhist monks at a ceremony to mark the fifth
anniversary of the rebuilding of the Shingye Temple on Mount Kumgang in the
DPRK [Photo: Jogye Order]

…plus a number of other items, including a selection of North Korean tours by various tour operators. END_OF_DOCUMENT_TOKEN_TO_BE_REPLACED

[It is an agreement that South Korea’s President Lee Myung Bak would rather forget — which is probably why the DPRK is reminding South Koreans and the world about the inter-Korean peace agreement signed on 4 October 2007 by the late ROK President Roh Moo-hyun and the late DPRK leader Kim Jong Il. Here are three reports: the first from South Korea’s Arirang TV, the second from China’s Xinhua news service, and finally an email to CanKor from the DPR Korean Committee of Solidarity with the World People. –CanKor]

North Korea has put the 2007 inter-Korean peace declaration back into spotlight.

Marking the fifth anniversary of the signing, the North’s Korean Central News Agency lashed out at the current Lee Myung-bak administration for scrapping the so-called Oct. 4th declaration.

The agency stressed the full implementation of the agreements is the only way to peaceful reunification and co-prosperity.

Experts say Pyongyang’s claims are targeted at South Korea’s next administration, with the presidential election just weeks away. END_OF_DOCUMENT_TOKEN_TO_BE_REPLACED 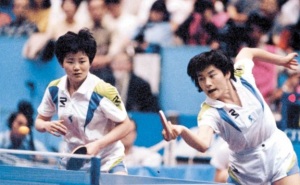 In Chiba in 1991 Hyun Jung-hwa of the ROK (right) and Li Bun Hui of the DPRK formed a joint Korean team. The pair won the female finals by defeating China.

China’s issuance of 40,000 work visas, and perhaps more in the pipeline, to North Koreans is a step in the right direction. It is well attested that the vast majority of North Koreans who have fled their homeland since the famine of the 1990s (the “Arduous March”) have been economic migrants seeking a better life, not political refugees, of whom only a handful were recorded in the previous four decades. The deal apparently came about as a result of a request by the DPRK’s new leader Kim Jong Un. Now, those who wish to do so will be able to legally work in China — as many already do in Russia — and send money (the Renminbi yuan is regarded as a hard currency in NK) and food home, avoiding falling into the hands of human traffickers and being smuggled into South Korea, where their lot is not a happy one. This will reduce the profits of this evil trade, and help the Chinese police crack down on the gangsters and rescue their victims.

It will also take the wind out of the sails of those who claim that North Koreans flee and fall prey to the traffickers because Pyongyang doesn’t allow them to leave.

Please feel free to consult the full issue by clicking on this link: DPRK Business Monthly Vol III, No.5 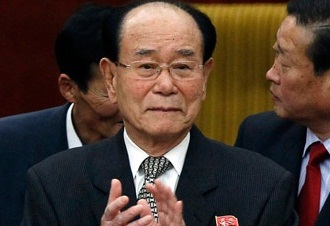 May has been a good month for debunking misconceptions about the DPRK. First of all, the story that during the “sunshine” years of ROK presidents Kim Dae-jung and Roh Moo-hyun the South delivered “handouts” of free food to the North and got nothing in return has turned out to be untrue. The fact is that the North received a low interest loan from South Korea’s state-owned Export-Import Bank to buy the food. END_OF_DOCUMENT_TOKEN_TO_BE_REPLACED

Publication: Bridging the chasm between human rights and peace

Pro-engagement activists have often argued that the pursuit of peace and reconciliation with the DPRK requires that human rights take a back seat in negotiations. At the other end of the spectrum have been anti-engagement activists who have argued that negotiation for peace and reconciliation is futile in the absence of human rights.

In May 2010 the U.S.-Korea Institute at the Johns Hopkins School of Advanced International Studies (SAIS) published a report entitled, “PURSUING PEACE WHILE ADVANCING RIGHTS: The Untried Approach to North Korea,“ by David Hawk. To my knowledge, this is the first serious attempt to bridge what have been assumed to be irreconcilable positions. END_OF_DOCUMENT_TOKEN_TO_BE_REPLACED