[This announcement was published by the United Nations News Service on 7 May 2013. –CanKor] 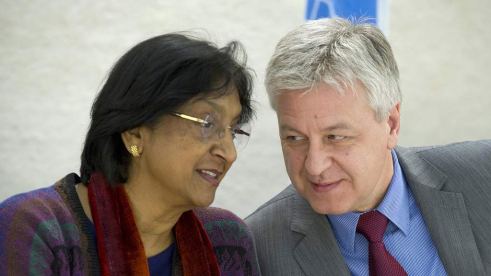 The President of the United Nations Human Rights Council, Remigiusz A. Henczel, today announced the appointment of the members of the commission of inquiry set up to investigate alleged abuses in the Democratic People’s Republic of Korea (DPRK).

The three-member commission will comprise Michael Donald Kirby, a retired judge from Australia; Sonja Biserko, founder and president of the Helsinki Committee for Human Rights in Serbia; and Marzuki Darusman, former Attorney General of Indonesia and the current UN Special Rapporteur on the situation of human rights in DPRK. END_OF_DOCUMENT_TOKEN_TO_BE_REPLACED

[CanKor Brain Trust member Roberta Cohen published an extensive analysis of the latest decision by the UN Human Rights Council regarding the DPRK in our partner-website 38North. For the benefit of CanKor readers we reprint the first part of this article here. For the rest of the paper, including footnotes, please access the 38North website here. –CanKor]

On March 21, 2013 the United Nations Human Rights Council, a body of 47 states, adopted by consensus a resolution to establish a commission of inquiry (COI) into North Korea’s “systematic, widespread and grave violations of human rights.” The commission is to be composed of three experts who will intensively investigate for a period of one year the human rights violations perpetrated by North Korea’s government with a view to ensuring “full accountability, in particular where these violations may amount to crimes against humanity” [emphasis added].

The establishment of the commission reflects long overdue recognition that a human rights ‘emergency’ exists in North Korea. Commissions of inquiry at the United Nations have mainly been directed at situations like Syria, Darfur or Libya where conflicts, atrocities and destruction are clearly visible and in the headlines. Adding North Korea to the list suggests a new look at what a human rights crisis might be. In contrast to other situations, North Korea has always managed to hide its crimes. Most prison camps are in remote mountain areas, access to the country is barred to human rights groups, and rigid internal controls make it impossible for anyone who does manage to visit to talk with North Koreans about human rights. Indeed, the lack of access and the UN’s inability to form an “independent diagnosis” of the situation has long contributed to the reluctance of its senior officials to speak out strongly about North Korea. Even the US State Department’s human rights report for 2011, published in 2012, contained the caveat that no one can “assess fully human rights conditions or confirm reported abuses” in North Korea. END_OF_DOCUMENT_TOKEN_TO_BE_REPLACED