[CanKor received the following letter directly from the Pyongyang-based Korean Committee of Solidarity with the World’s People. Images have been added from open Internet sources. We reproduce the letter in full without further comment. –CanKor]

A spokesman for the DPRK Foreign Ministry released the following statement Friday on the entry of DPRK’s preparations for launching Kwangmyongsong-3 into a full-fledged stage of action:

The DPRK’s preparations for launching Kwangmyongsong-3, an earth observation satellite, by its own efforts and with its indigenous technology have entered a full-fledged stage of action. 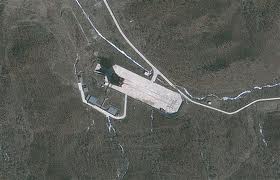 The projected launch of the working satellite is a gift to be presented by the Korean people to the centenary of the birth of President Kim Il Sung while entering the gate to a thriving nation and a work for implementing the behest of leader Kim Jong Il.

It has become a law-governed requirement of the age of latest science and technology and a worldwide trend to launch and use a working satellite urgently needed for the country’s economic development. END_OF_DOCUMENT_TOKEN_TO_BE_REPLACED