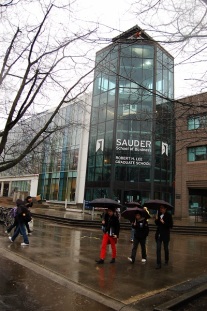 [CanKor Brain Trust member Prof. Park Kyung-Ae, director of the Center for Korean Research at the University of British Columbia in Vancouver, Canada, is host to six DPRK Professors who are studying economics for 6 months at UBC. CanKor has been aware of this project for some time, but honoured Dr. Park’s request for discretion, considering the sensitivity of the guests and the subject they are studying. The article we are reprinting here appeared first in the Yonhap News Service and is taken from The Korea Times. An earlier article in Asahi.com by Yoshihiro Makino, under the title “N. Korean professors start capitalism studies in Canada” contained some factual errors which have been corrected in the current article. The DPRK’s Ambassador (to Canada) Sin Son Ho, accompanied by two of his colleagues from the DPRK Permanent Mission to the United Nation in New York visited Vancouver from 11 to 14 August to meet with the visiting professors, who are the first group to have been invited under the Canada-DPRK Knowledge Partnership Program, which Professor Park helped launch at UBC last year. –CanKor.]

SAN FRANCISCO (Yonhap) — Six North Korean professors are studying economics and other related subjects at a university in Canada on a months-long program initiated by the school, the program director said Wednesday, opening a rare opportunity for the people of the repressive regime. END_OF_DOCUMENT_TOKEN_TO_BE_REPLACED