When it comes to message control, our current Prime Minister’s office has nothing compared to the likes of Pyongyang. The rulers of the DPRK have for the last seventy years been quite fastidious when it has come to shaping the regime’s official message. After all, when you enjoy the benefits of controlling both the media and your diplomats abroad, the only thing you really have to worry about are the folks who decide to leave your tightly-controlled society.

It’s surprising that despite some extreme shocks to the system, including the famine and the death of the only leader the country had ever known in 1994, the regime’s grip did not grow any “looser.” Perhaps the areas around the country’s northern provinces have become a little more porous after the famine, but despite the relative free flow of knowledge that appears to be growing in the borderlands between China, the number of people (successfully) fleeing the country has dwindled, especially after the recent power succession.

This makes the conflicting messages coming out of the country quite surprising. END_OF_DOCUMENT_TOKEN_TO_BE_REPLACED

So far DPRK doing what it said, by Chris Nelson

[The war of words has already started. North Korea has declared the Armistice Agreement inoperative, has cut off the hot line at exactly the time hot lines are most needed to prevent an inadvertent slide into accidental hot wars. Large military exercizes are currently being conducted on both sides of the DMZ. How will South Korea and/or the USA respond to an intended or unintended skirmish around disputed border islands at the sensitive Northern Limit Line, as happened in Yeonpyeong in 1999, 2002 and 2010? A “kinetic” response has been threatened by all three parties. Could this devolve into a tit-for-tat escalation towards an all-out war? As he is wont to do, Chris Nelson has been following developments from an American perspective in the Nelson Report. With his permission, we reprint sections of the 11 March 2013 edition. –CanKor]

So the 11th arrived and as the annual US-S. Korea joint military exercises continue, the DPRK seems to be keeping to its “schedule” of doing things to rachet-up tensions, but not (yet) actually shoot anything or anybody. However, that, we can authoritatively report, is seen by both US and S. Korean involved experts as likely not a question of “if”, but “when/what”.

Speculation…nothing on this can be called “informed”…but speculation by folks whose responsibility it is to try and predict: many expect some kind of kinetic action near or along the Northern Limits Line, rather than against Seoul or a military base…perhaps carried out in a way which cannot be immediately ascribed to direct DPRK aggression. (See discussion, below.)

The thinking behind that includes Pyongyang seeking to confuse ROK (and US) decision-makers on the critical “retaliation” question, especially given Pres. Park’s firm warnings that not only will she authorize a military response to a kinetic attack, but that a pre-emptive ROK attack cannot be ruled out, under certain circumstances. END_OF_DOCUMENT_TOKEN_TO_BE_REPLACED 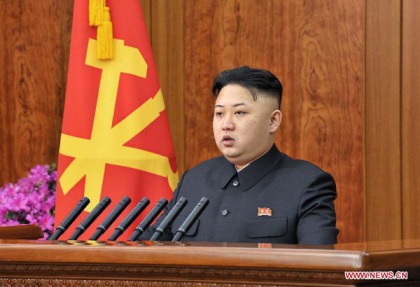 The young Kim Jong Un appeared before television cameras to read the lengthy speech, which will be the subject of intensive study within North Korea. But as can be seen by a sampling of “expert” opinions, this annual summary of DPRK policies is also carefully dissected by DPRK-watchers the world over.

The full text of the speech (courtesy the Korean Central News Agency KCNA) can be read at the following link: New Year Address Made by Kim Jong Un.

To see the young leader reading the text (with the voice of an interpreter in English) please watch the video at the bottom of this article.

Here follow some early commentaries about the significance of this speech by a number of (mostly American) experts as assembled by Chris Nelson taken from the 2 January 2013 Nelson Report:  END_OF_DOCUMENT_TOKEN_TO_BE_REPLACED

When CanKor received a statement from the Korean People’s Army Panmunjom Mission protesting this year’s “Ulji Freedom Guardian joint military exercises for aggression” by “the U.S. imperialists and the south Korean warmongers,” I put it in our propaganda archives as one of those annual oddities.

A man who plays a role of a terrorist has weapons pointed at him by South Korean soldiers (camouflaged uniforms) and police officers (blue uniforms) during an anti-terrorism drill at Ulchi Freedom Guardian, near a bank in downtown Seoul, South Korea, on Monday, 20 August 2012. (Photo by AP)

Ulchi (South Korean spelling) Freedom Guardian is the new name (as of 2008) of the military exercise previously known as Ulchi-Focus Lens, a combined military exercise between South Korea and the United States. The exercise is the world’s largest computerized command and control implementation which mainly focuses on defending South Korea from a North Korean attack. Initiated in 1976, the exercize is conducted annually during August or September.

Each year, DPRK authorities launch vehement protests against this military maneuver, claiming that it is a precursor to invasion of the North. I actually found the title of the KPA statement surprisingly non-belligerent, even though the text is full of the familiar aggressive hyperbole we have come to expect from North Korean scribes. You may sample it yourself here: Korean People’s Army Panmunjom Mission clarifies its stand to not miss opportunity for Reunification.

More interesting for us was an email we received from the Pyongyang-based Korean Committee for Afro-Asian Solidarity, which made the following claim: END_OF_DOCUMENT_TOKEN_TO_BE_REPLACED

An Insider’s Account of Obama’s North Korea Strategy, by Jeffrey A. Bader

[On 8 March 2012 the Brookings Institution held a launch for Jeffrey Bader’s latest book, “Obama and China’s Rise: an Insider’s Account of America’s Asia Strategy”. Bader is currently John C. Whitehead Senior Fellow in International Diplomacy, Foreign Policy at the John L. Thornton China Center in Washington DC. Previously, he was President Obama’s Senior Director for Asia on the National Security Council for the first 3 years. The following is a selection of what the author had to say about US North Korea policy, which figures prominently in the book. This selection is taken from the 9 Mach 2012 edition of The Nelson Report. To hear the entire speech, please click March 8, 2012 book launch at Brookings. –CanKor]

(…) Instead of describing how seamlessly we executed plans drawn up in the first days, let me lay out what we did in reaction to events. As one of my colleagues said to me after a frustrating day dealing with demands for elaboration of a strategy, “there’s no such thing as strategy; there’s only tactics.” An exaggeration, to be sure, sort of like the observation that history is just one damned thing after another. But it frequently feels like the complete truth when you’re in the middle of the fray.

First, North Korea, since that was the issue that posed the most immediate dangers and consumed so much time, effort, and energy.

We came into office on something like automatic pilot, prepared to pick up implementation of Assistant Secretary Chris Hill’s plan for dismantling the Yongbyon plutonium reactor. But North Korea quickly eliminated that option. Intelligence in February 2009 showed North Korean plans to launch an ICBM, later announced to be a satellite launch. We could not proceed with implementation of dismantlement, and further international shipments of heavy fuel oil, under the shadow of an ICBM launch. So it’s fair to say that North Korea’s plan produced a very significant hardening of attitudes in the Obama national security team. END_OF_DOCUMENT_TOKEN_TO_BE_REPLACED

38 North: Dealing with the Kims by Joel Wit & Jenny Town

[From time to time CanKor alerts readers to papers published by our partner-site 38North. The following article is authored by Joel Wit and Jenny Town. This article originally appeared on www.foreignpolicy.com, and has been reprinted with permission. The original can be found here. Please follow our link to this article on the 38North site. –CanKor]

This week’s meeting between U.S. Special Envoy Glyn Davies and North Korean First Vice Foreign Minister Kim Gye Gwan will be the first official encounter between the United States and North Korea since the death of Kim Jong Il two months ago. After endless speculation by the press and experts about the future of North Korea, this meeting will be an important reality check: an opportunity to take the pulse of the new management in Pyongyang, and particularly to discern changes or continuity in its efforts to build weapons of mass destruction.

Even on a good day, of course, we underestimate the difficulties of dealing with North Korea at our peril. Korea specialists are fond of calling it the “land of no good options” (although that is probably true for many foreign-policy challenges facing the United States today). The North remains the poster child for rogue states because of 60 years of bad behavior, including its more recent nuclear and missile tests in 2006 and 2009 and conventional military attacks on South Korea in 2010. If there is anyone who knows that, it’s those of us who have had direct experience dealing with North Koreans at the negotiating table, on the ground, or conducting any other business face-to-face with them. END_OF_DOCUMENT_TOKEN_TO_BE_REPLACED

[The following is taken from the 3 January 2012 edition of The Nelson Report, with kind permission by the author. –CanKor.]

The funeral parade is now over, and the official titles, as of this weekend, are all now awarded…and all to the Boy General, every single one, from the looks of it…and China has hastened to declare its fealty. (…)

So…is this really real? There’s no conceivable way to tell for the time being, and perhaps not for months, given the deliberate opacity of the ruling elite in Pyongyang, so we urge caution in reading any quotes from experts using flatly declarative verbs, adverbs and adjectives. (…)

With the above cautions in mind, here’s “known unknowns” we keep on our List: