[We have reported several times before about CanKor Brain Trust member Dr. Park Kyung-Ae‘s Knowledge Partnership Program (KPP), which has recently completed the second year that North Korean economics professors attended economics courses at the University of British Columbia (see links at bottom of this article). The following article is taken from a National Post article by Tristin Hopper, which was published on 2 January 2013. –CanKor]

Two weeks ago, six professors packed up their dorm rooms at the quiet, Vancouver campus of the University of British Columbia, boarded aircraft at the city’s international airport and began the Jacob’s ladder of flights that would eventually return them home to North Korea.

Just as quietly as it began, the second phase of the Knowledge Partnership Program (KPP), North Korea’s only academic exchange program with North America, had come to a close.

It is the product of a little-known relationship forged even before Canada had opened relations with the Stalinist country, and the University of British Columbia is the only academic institution in North America — and possibly the West — to host regular delegations of North Koreans. Little is known of the program and details are carefully guarded from public scrutiny, but just as a U.S. ping pong team helped open Maoist China to the West, proponents contend that one of UBC’s most obscure international programs may hold the key to opening the borders of one of the world’s most closed countries.

“Particularly when we do not have active interactions between Canada and North Korea, I think academic exchange is really needed,” said Kyung-Ae Park, a UBC political scientist and founder of the KPP. END_OF_DOCUMENT_TOKEN_TO_BE_REPLACED

“Reckless, wilful, provocative and reprehensible” are some of the adjectives used by Canada’s Foreign Affairs Minister John Baird in a statement issued on 11 December 2012, soon after the DPRK announced its satellite launch. The text is found on the website of Foreign Affairs and International Trade Canada and reads as follows:

“The regime in Pyongyang is a grave threat to the security and stability of the region and beyond.

“With this latest launch, the rogue regime has once again shown total disregard for its people by choosing to fund military and nuclear programs while the basic needs of the North Korean people go unmet.

“Canada urges North Korea to cease this reckless behaviour and to live up to its international obligations.

“Canada stands with the international community in condemning this reprehensible act.”

[CanKor Brain Trust member Park Kyung-Ae has for the second year in a row hosted six DPRK economics professors for further study in Western-style economics at the University of British Columbia in Vancouver, Canada. This article about the Canada-DPRK Knowledge Partnership Programme (KPP) was first published on our partner-site 38North. –CanKor]

Knowledge sharing is a powerful tool to promote economic growth and improve quality of life in developing countries. It gives participants access not only to practical information, but the worldview, motivations, and experiences of their partners. Sharing of this nature facilitates mutual understanding between individuals that, in turn, builds empathy, compassion, and patience—the foundation for all relationships, whether between individuals or states. Knowledge partnerships that focus on human resource development through various academic and practical programs can be one of the most successful areas of cooperation between North Korea and the outside world. Such programs are particularly important in this context because they create alternative, non-governmental avenues for dialogue that can remain active when the political environment limits official lines of communication. END_OF_DOCUMENT_TOKEN_TO_BE_REPLACED

A statement warning North Korea about the planned launch of a “long-range ballistic missile” was issued by Canada’s Foreign Affairs Minister John Baird on 3 December 2012. The text is found on the website of Foreign Affairs and International Trade Canada. It reads as follows:

“We are extremely concerned about North Korea’s plan to test a long-range ballistic missile.

“Canada strongly warns North Korea against this provocation, which clearly violates its obligations under successive UN Security Council resolutions and constitutes a threat to regional peace and security.

“While the North Korean people struggle to find the basic necessities to survive, their government has turned a blind eye to their plight and instead chooses to advance its military capability. This is regrettable and completely unacceptable.

“Canada will be working with like-minded countries and regional players to persuade North Korean officials to abandon their military ambitions and tend to the pressing needs of the North Korean people.”

…plus a number of other items, including a selection of North Korean tours by various tour operators. END_OF_DOCUMENT_TOKEN_TO_BE_REPLACED

[Although we have not seen any of this in the Canadian press, this article by Lee Chi-dong appeared in Yonhap News Agency on 24 September 2012, and was reprinted by The Korea Times. –CanKor]

Canada expressed worries Sunday over security risks from North Korea’s nuclear proliferation, the latest in a series of moves to put diplomatic pressure on the communist nation.

“North Korea’s nuclear proliferation has a destabilizing impact on the Korean Peninsula and Northeast Asia. Canada has significant economic and strategic interests in this region that could be at risk from North Korea’s activities in this regard,” Canadian Security Intelligence Service said in an annual report on global security threats. 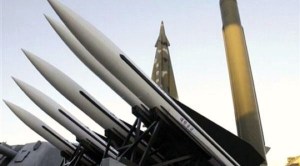 The agency noted North Korea, which conducted two nuclear tests in the past, operates a uranium enrichment program on top of “sufficient plutonium for a small arsenal of nuclear weapons.”

“North Korea has shown no inclination to ‘denuclearize,’ as called for by the international community and, moreover, has been proven willing to export its nuclear technology to states such as Syria,” it said.

Canada, a G-8 member, has not been directly involved in the six-way talks on North Korea’s nuclear program. But it has shown keen interest in the North Korea issue. END_OF_DOCUMENT_TOKEN_TO_BE_REPLACED

When CanKor received a statement from the Korean People’s Army Panmunjom Mission protesting this year’s “Ulji Freedom Guardian joint military exercises for aggression” by “the U.S. imperialists and the south Korean warmongers,” I put it in our propaganda archives as one of those annual oddities.

A man who plays a role of a terrorist has weapons pointed at him by South Korean soldiers (camouflaged uniforms) and police officers (blue uniforms) during an anti-terrorism drill at Ulchi Freedom Guardian, near a bank in downtown Seoul, South Korea, on Monday, 20 August 2012. (Photo by AP)

Ulchi (South Korean spelling) Freedom Guardian is the new name (as of 2008) of the military exercise previously known as Ulchi-Focus Lens, a combined military exercise between South Korea and the United States. The exercise is the world’s largest computerized command and control implementation which mainly focuses on defending South Korea from a North Korean attack. Initiated in 1976, the exercize is conducted annually during August or September.

Each year, DPRK authorities launch vehement protests against this military maneuver, claiming that it is a precursor to invasion of the North. I actually found the title of the KPA statement surprisingly non-belligerent, even though the text is full of the familiar aggressive hyperbole we have come to expect from North Korean scribes. You may sample it yourself here: Korean People’s Army Panmunjom Mission clarifies its stand to not miss opportunity for Reunification.

More interesting for us was an email we received from the Pyongyang-based Korean Committee for Afro-Asian Solidarity, which made the following claim: END_OF_DOCUMENT_TOKEN_TO_BE_REPLACED

Canada’s Relations with the Korean Peninsula, by Dean J. Ouellette

[The following is taken from a paper by Dean J. Ouellette, Assistant Professor, Kyungnam University in Seoul. A Canadian friend of CanKor since the early days, Prof. Ouellette edits the Institute of Far Eastern Studies IFES Forum. The paper from which this excerpt is taken is a revised version of an article that recently appeared in Asia-Pacific Business and Technology Report, vol. 4, no. 3 (September 2012). To read the complete paper, which begins with Canada-ROK relations, please follow this link. –CanKor] 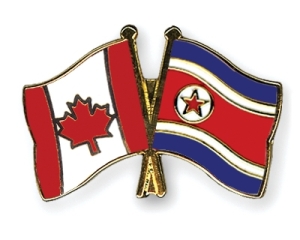 Canada and Korea share a history that dates back to the late 19th century, when Canadian missionaries arrived on the peninsula, and introduced Western medicine and education, and helped with organizing and fundraising to build hospitals and schools. One early Canuck even supported Koreans during the March 1, 1919 Independence Movement, and ended up being deported by the Japanese colonial authorities.

Official Canadian government involvement in Korea began in 1947 when Canada participated in the United Nations Commission supervising liberated Korea’s then free elections. Canada later formally recognized South Korea in 1949. Canada also got involved in the Korea War (1950 – 1953) — although reluctantly at first — by recruiting and sending a “special force” of battalion strength to participate in combat operations in support of the United Nations’ contingent. Canada’s troops first saw action in February 1951. Two months later in April 1951, this special force distinguished itself at the battle of Kapyong. Soon afterward, Canadian forces would be augmented to an entire brigade (the 25th Canadian Infantry Brigade). By the time the armistice negotiations brought the fighting to a halt in 1953, Canada had sent a total of 26,971 military personnel to the Korean peninsula, the third largest contingent of the UN forces. A total of 516 Canadian soldiers laid down their lives — although only 312 were killed in action; the others died of disease and other causes. If Canada learned anything from the Korean War, it was, as renowned Canadian historian Pierre Berton recounts, to stay out of them, and concentrate on peace and international peacekeeping. [Pierre Berton, Marching As to War: Canada’s Turbulent Years 1899–1953 (Toronto: Anchor Canada, 2001), p. 576.]

While the Canada-South Korea relationship looks to expand, Canada’s relations with North Korea (Democratic People’s Republic of Korea, or DPRK) are anything but normal. END_OF_DOCUMENT_TOKEN_TO_BE_REPLACED

Six professors of leading North Korean universities are staying in Vancouver to study capitalism at a Canadian university on a six-month program, the program director said Friday, drawing fresh attention to the North’s possible transition under its Swiss-educated young leader.The economics professors from three North Korean universities arrived in Canada earlier this month to take courses at the University of British Columbia (UBC) in the fall semester, which begins in September, after a two-month language course, Professor Park Kyung-ae, director of the Center for Korean Research, said.

“They will mainly study international business, economics, finance and trade,” Park told Yonhap News by phone, without giving further details of their identifications.The elite universities include Kim Il-sung University, the top university named after the country’s founding leader, the People’s Economics University and the Pyongyang Foreign Language College, Park said. All the institutions are located in the North’s capital, Pyongyang. END_OF_DOCUMENT_TOKEN_TO_BE_REPLACED

[For the second year in a row, the University of British Columbia in Vancouver, Canada, is hosting six economics professors from the DPRK. The following Program Information comes to us from CanKor Brain Trust member Park Kyung-Ae, as issued by the university’s Public Affairs Department. The North Korean scholars are unavailable to speak to media. However if you wish to speak to a UBC spokesperson, please consult the original July 2012 document here. –CanKor] 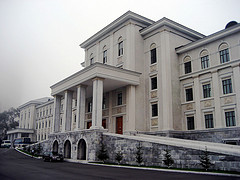 The University of British Columbia is hosting six North Korean professors for six months starting in July 2012 as part of the Canada-Democratic People’s Republic of Korea (DPRK) Knowledge Partnership Program.The KPP was established in 2011 when a first visit of six professors was organized by Kyung-Ae Park, director of the KPP and a professor of political science at UBC. It aims to foster academic study and knowledge exchange between the two countries.

“This program is an example of how universities can promote constructive engagement through teaching, learning and research,” says Grace Wong, senior advisor international, office of the Provost and Vice President Academic at UBC. “We hope to continue to increase collaborations in the peninsula through our Korean studies programs.” END_OF_DOCUMENT_TOKEN_TO_BE_REPLACED