Far from just a getaway for North Korean children, thousands of young people from countries including China, Russia, Nigeria, Mongolia, Mexico, Syria (where North Korean military officers have reportedly begun advising Assad’s forces), Tanzania, and Thailand have attended the Songdowon camp since it opened in 1960, which expanded to accommodate 1,200 guests in 1993 “under the special care of President Kim Il Sung and the leader Kim Jong Il.”

We know where the international campers at Songdowon come from, but who, exactly, are they? Details are pretty much non-existent. As 40+ year Korea-watcher (and CanKor Brain Trust member) Aidan Foster-Carter, honorary senior research fellow in Sociology and Modern Korea at Leeds University, said, “Thanks for writing, but alas I have no info to offer. I’ve often wondered the same thing myself.”

Enter Valentina Boltacheva. Now a student at Vladivostok State University of Economics and Service, at the age of 14, she was a camper at Songdowon.

Valentina grew up in Arsenyev, a town of 56,000 in Primorsky Krai, Russia’s Far East, and the home of Progress Arsenyev Aircraft Works, manufacturer of, among other things, the Ka-52 “Alligator” attack helicopter.

As is–or at least was–a common practice in certain countries of a certain political persuasion, vouchers for meals, holidays, and so forth will, on occasion, be doled out to dedicated (or well-connected) workers. In 2007, the regional authorities “decided to support those who worked at the plant,” Valentina told me, “and allowed the Progress workers’ children to compete for 30 available trips to Songdowon.”

“Every candidate had to answer many questions about North Korea and the plant where my mother works,” Valentina said. Her mother helped with information about the factory, but as Arsenyev’s internet service was spotty at that time, Valentina did her research at the library. A few weeks later, Valentina’s mother got the news that her daughter had been selected go to Songdowon.

“I was happy,” Valentina said. “It was my first trip abroad.”

The trip would comprise one week in Wonsan and one in Pyongyang. Valentina’s family “paid only for making my passport to travel abroad, [but] my trip and flight were free–it was a present for the workers’ children,” she explained. Before they left for Songdowon, the kids were told to prepare what Valentina described as a “culture program” to perform at the camp. They chose a traditional Russian folk dance, which they staged in the campus theater.

“Everyone from our group took part; we rehearsed for a long time,” she told me. “We had many talented students–some of them danced, some of them sang and played musical instruments.”

The Arsenyev detachment was joined by campers from Tanzania, China, Mongolia, and North Korea, as well as other Russian students from Vladivostok and Nakhodka (of which the latter, according to KCNA, semi-confusingly hosted its own Kimjongilia show in April “on the occasion of the birth anniversary of President Kim Il Sung’s birthday.”) Though the Songdowon campers’ living arrangements were kept restricted (“Russians lived with Russians and Koreans lived with Koreans,” Valentina said), she was able to connect with a handful of North Koreans during her stay.

“I made friends with two Korean boys, Tom and Jerry–I don’t know their real names; this is what they wanted us to call them,” Valentina recalled. She also got to know “a Korean girl named Chen and a Tanzanian guy, Oswald.”

Communicating didn’t pose a problem, as many of the North Korean campers were proficient speakers of English, Russian, or both–and they weren’t shy about reminding the international guests what a treat it was for them to be there. “They told us that in Korea, only A-students were allowed to go to this camp,” Valentina said. “I can make a conclusion that Songdowon is a really prestigious camp in North Korea.”

As for activities, Valentina remembers “swimming, boating, and doing morning exercises.” Other memories include “dancing traditional Korean dances” and, this being the DPRK, “learning songs about Korean political leaders.”

Valentina said she has fond memories of Songdowon–a sentiment seconded by Miraj Jakaya Kikwete, son of Tanzanian president Jakaya Kikwete, who described his time to me at the Songdowon camp as “an experience of a lifetime.”

Over the past few years, Matthew Reichel, co-founder of the Pyongyang Project, a Canadian venture committed to responsible engagement in the DPRK through education, tourism, social entrepreneurship and knowledge exchange, has gotten to know Songdowon’s “publicizers” quite well – bureaucrats operating under the auspices of the Kim Il Sung Socialist Youth League.

“They pick two people every year who have to go to out and sell this camp, which is really becoming a tougher and tougher sell,” Reichel told me.

“Parents in China don’t want to send their kids to North Korea, they’re sending their children to camp in Hong Kong, Taiwan, the United States. So, these guys are having to go to second-tier cities in China’s Northeast and Central Coastal areas to try and convince local schools, governments, and travel companies to send kids to Songdowon.”

According to Reichel, many of the schools in Pyongyang organize short trips to Songdowon all summer long for their local A-students, which, he said, “doesn’t necessarily have anything to do with grades.” But, by Kim Il Sung’s decree, Songdowon is supposed to be an international camp. If there are no foreigners there, someone’s failing. As Reichel said, “Kim Il Sung gave them this task.” 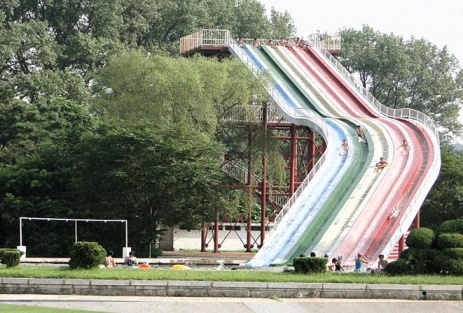 In North Korea, government entities sustain themselves by running businesses–the Youth League owns the Pyongyang Chongnyon (Youth) Hotel, their own trade and tourism companies, and Reichel said “several of the fried chicken restaurants in Pyongyang are theirs.” However, the Songdowon camp runs at a severe loss.

Some kids, like Angelina, are sent as part of a fully-paid exchange program. And some, it seems, receive partial scholarships from their local governments. In an email, the Nakhodka City Administrator’s office told me that parents are responsible for about 300 euros in fees and travel costs for their child’s two-week stay, with all other expenses being “met by the Korean side.”

“Remember, this is a political thing, not an economic thing,” Matt Reichel explained. “It’s just one of the many appendages of the Youth League; they’re losing money on Songdowon, but they have to do it, they have to continue to operate it as an international socialist youth summer camp.”

Still, he said, they “can’t make it cheap enough” to fill Songdowon’s beds.

“Thing is, the [recruiters] have a quota,” said Reichel. “They asked us once if we could get Westerners to come; we said absolutely, we could do some great things there–with university students. They said no, it has to be kids, something in the charter that they can only be up to age 16. So, can we organize a group of Canadian kids? We were like, ‘Uh…that’s not going to work out.’”

“It is the firm determination of the WPK [Workers Party of Korea] to successfully remodel the camp closely associated with the leadership exploits of the great Generalissimos Kim Il Sung and Kim Jong Il as required by the new century,” announced KCNA.

This has translated, Reichel said, into “a drive to invest in Kangwon province, focusing on Wonsan and Mount Kumgang,” with reported plans for a ski resort and an upgrade to Wonsan’s airport. 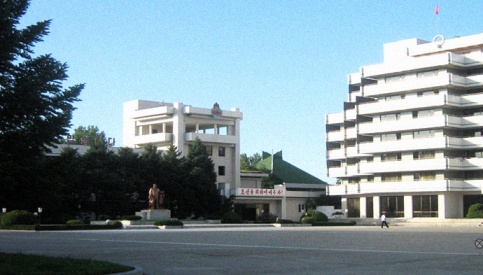 As for the future of the Songdowon International Children’s Camp, an intriguing take comes by way of North Korea scholar (and NK News contributor) Benjamin Young, and a video he shot of the Mongolian campers’ cultural performance at Songdowon last July:

Said Young, “The Songdowon Children’s Camp represents the current dilemma confronting North Korean society: the influx of Western and South Korean culture but the desire to stick with ‘revolutionary conservatism.’”

As evidenced in the video, foreign children enjoy Western music, like the Black Eyed Peas, but, said Young, “have come to spend the summer in a nation that prohibits its citizens from listening to this same type of music.”

“The questions that arose from my experience in the camp are numerous,” he recalled. “Why did the kids come to North Korea? Why does the North Korean state support this camp and these international students? What purpose does the camp serve?”

Want to send your child to Songdowon? Contact your local Korea DPR Embassy for pricing and further instructions.

2 Responses to “How to send your child to summer camp in North Korea, by Justin Rohrlich”