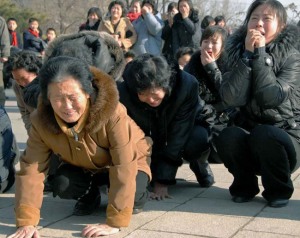 The death of North Korean dictator Kim Jong-il is worrying local residents with ties to the country.

Unlike the deaths of other high-profile dictators, including most recently Libya’s Moammar Gadhafi, Kim Jong-il’s death is not being met with relief and joy.

Instead, his death has caused fear and uncertainty, said Brock University political science professor Charles Burton, who worked on North Korean relations in the Canadian Embassy in Beijing from 1998 to 2000.

“It’s not a cause for celebration … we don’t know what will happen.”

He said despite the fact the dictator chose his 28-year-old son Kim Jong-un as his successor, it’s unclear if the regime will continue.

Burton said North Koreans equate age and experience with wisdom and may not be willing to accept such a young, inexperienced leader.

“The real concern is the transition,” he said.

Burton said there’s a strong possibility a power struggle between different factions of the Kim family and the military will break out.

He said South Korea is on high alert for fear its neighbour will make some sort of move. He said the North Korean regime is known for causing provocative international incidents, such as nuclear testing or missile launches.

In fact, he pointed out reports that North Korea did a missile test prior to the announcement of the dictator’s death.

Eunji Park, 26, a South Korean studying at Brock, said her country needs to get ready for anything in light of Kim Jong-il’s death.

“We are worried about what’s going to happen … but we don’t expect a war,” she said, noting her parents live in Seoul.

Park said she had mixed emotions about the ruler’s death.

She added that many people in North Korea have suffered under the regime.

Burton agreed, adding he’s hopeful that whatever happens it begins an end to the suffering of that country’s people.

“You’re looking at a country where half the children are suffering from malnutrition,” he said. “It’s a really terrible situation. We can only hope the successor’s regime will work to improve conditions.”

The funeral of Kim Jong-il will be held Dec. 28.