US reaction to European food aid by Chris Nelson

[The following item is taken from the 6 July 2011 edition of the Nelson Report, with the kind permission of the author. –CanKor.]

We are reliably informed by experts like Marc Noland at Peterson IIE that the 10-million Euro program announced by Europe over the weekend is not “fairly large”, as we suggested last night, but in fact rather modest, in comparison to previous international efforts.

Yonhap has an excellent summary of the situation on a briefing by US State Department‘s Victoria Nuland (following this introduction) to which we would add one or two bits of analysis, based on our own probings:

We are told to take with a grain of salt any claim the US is close to agreeing with the Europeans on this, unless you understand that in fact, it appears the Euro’s food is seen by the donors as “the least they could do, so they did it”, given the generally “soft” Euro humanitarianism in the face of unpleasant strategic realities.

We keep hearing that while Secretary of State Hillary Clinton is herself more inclined to be “forward leaning” in seeking an opening to the DPRK, whether via food aid or exploratory talks about the 6 Party Talks situation, at least two large concerns will continue to restrain her alleged impulses:

First, the professionals at AID remain as firm as they have been since the Clinton Administration that on balance, food is a strategic commodity in the eyes of the Kim Regime, and therefore the US would be naïve to treat food as anything else…meaning that in return for any US food, there must be some strategic linkage to things the US wants. So ironically, it’s usually State types pushing humanitarian issues, while AID wants something in return;

Second, the Secretary understands and supports the Obama/NSC-led determination to not get out of step with the (ROK) Lee Administration on any substantive issue, including food aid to the DPRK.

And as we reported last night, the State/AID mission to Pyongyang came back very pessimistic that the DPRK would agree to US-levels of delivery verification…a point reinforced by informal comment today that the Europeans didn’t get as strong a verification deal as some media reports.

Parenthetically, we note reports that the newly installed 6 Party Talks Special Envoy, Clifford “Ford” Hart, will be going out to the region in the next week or so, to assess the situation. State Department sources say these reports are wrong.

WASHINGTON, July 5 (Yonhap) — The United States said Tuesday that it “understands” the European Union’s decision to provide North Korea with food aid but stressed that it will make its own decision on aid. 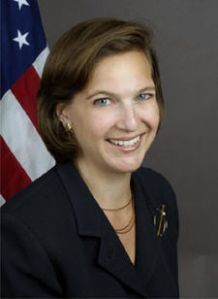 “We have noted the EU’s move. We have talked to the EU about its move. And we understand their decision. We have not made our own decision,” State Department spokeswoman Victoria Nuland said at a press briefing. The EU announced earlier this week that it will send food aid worth 10 million euros, or US$14.5 million, to North Korea, said to be suffering a severe food shortage. The EU’s decision follows a June trip by a team to assess the food situation there.

The EU said its plan for the food shipment is to save the lives of 650,000 vulnerable residents in the communist nation despite long-stalled denuclearization efforts. The first batch of delivery, apparently non-rice products, is scheduled to arrive there next month. Observers said the EU’s initiative will put pressure on the U.S. and South Korea, which are considering similar assistance. Nuland sidestepped a question on whether the U.S. welcomes the EU’s decision, instead choosing the word “understand.”

When asked if the EU’s move will affect Washington’s consideration of aid, she did not give a direct answer either. “Obviously, we are in close touch with the EU on these issues, as we are in close touch on all of the issues that we work on around the world,” she said. The U.S. sent a separate delegation to the North in late May to verify its claim that it is in urgent need of food. The nuclear-tipped North has long relied on food handouts from foreign nations, mainly China and South Korea.

Seoul delivered 200,000-300,000 tons of rice to Pyongyang each year under the so-called sunshine policy before the current Lee Myung-bak government was inaugurated in early 2008 on a pledge to link such aid with a denuclearization process. U.S. officials have been calling for measures to guarantee the transparent distribution of food.

On the nomination of Wendy Sherman as under secretary for political affairs, Nuland said her department hails the White House’s choice. She refused to confirm reports that Sherman, a former Clinton administration official known for efforts to engage North Korea, will mainly deal with North Korea and other Asia affairs, while Bill Burns, nominated to be deputy secretary of state, focuses on Europe and the Middle East.

“It will be premature to talk about the likely division of labor,” she said, in that they have yet to be confirmed by the Senate. She said Sherman is “very experienced” in Asia issues, in particular Korea issues.